Google’s already embraced NFC for mobile payments, and it’s now ready to do some sharing as well. That comes in the form of the new Android Beam feature for Ice Cream Sandwich, which the company just announced at its joint event with Samsung in Hong Kong. Much like HP’s ill-fated Touch-to-share functionality, it will let you simply tap two NFC-enabled devices together to share a piece of information. That will work with a range of apps and services in Android, including YouTube videos, contact information, maps, web pages, and even links to apps in the Android Market. What’s more, Google also announced that the SDK is available for download today — get it at the source link below.

Remember when HP showed off transferring webpages from the TouchPad tablet to the Pre 3 just by touching? Remember thinking “Wow, that’d be cool if I actually had a TouchPad and a Pre 3?” Android Beam is the answer to that problem, a version of that very same functionality that works across NFC-devices running Ice Cream Sandwich — namely, the Samsung Galaxy Nexus. We got the chance to play with a few phones that had the appropriate software builds and batteries, and found the functionality to be quick and useful — when things weren’t crashing. More after the break.

he NFC circuitry in the Galaxy Nexus is indeed built into the battery, not the backplate, and by touching two devices together you can exchange a multitude of things. The stock demo is of course exchanging websites, but contacts can also be swapped, along with directions and even apps — well, links to apps. Touch one phone to another and it’ll bring up the entry in the Android Market. Sadly no direct pushes of APKs.

Apps will be able to tie into this and do whatever they like down the road, so we should see some interesting applications for games and the like once Ice Cream Sandwich starts to be deployed on more devices. Hopefully by then things will be a little more reliable, as we managed to crash the demo exchanging one address to another device. It’s still just pre-release software, remember. 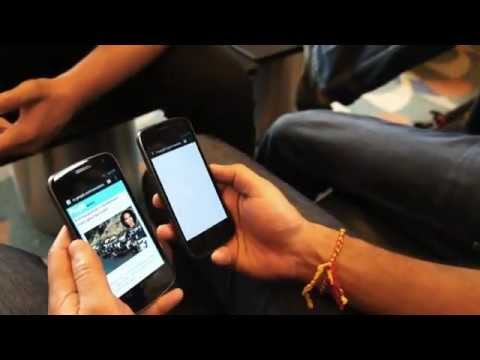