The class materials are available at http://www.OpenSecurityTraining.info/LifeOfBinaries.html
Follow us on Twitter for class news @OpenSecTraining.
The playlist for this class is here: http://bit.ly/1cdrfel
The full quality video can be downloaded at http://archive.org/details/opensecuritytraining

Have you ever wondered what happens when a C program is compiled and executed on a system? This three-day class by Xeno Kovah will investigate the life of a binary from birth as C source code to death as a process running in memory being terminated.

Topics will include but are not limited to:

*Linking object files together to create a well-formed binary.

*How Windows loads a binary into memory and links it on the fly before executing it.

Along the way we will discuss the relevance of security at different stages of a binary’s life, from how viruses *really* work, to the way which malware “packers” duplicate OS process execution functionality, to the benefit of a security-enhanced OS loader which implements address space layout randomization (ASLR).

Lab work will include:

*Manipulating linker options to change the structure of binary formats

*Using WinDbg to watch the loader resolve imports in an executable

*Using the rootkit technique of Import Address Table (IAT) hooking to subvert the integrity of a program’s calls to external libraries, allowing processes to be hidden. 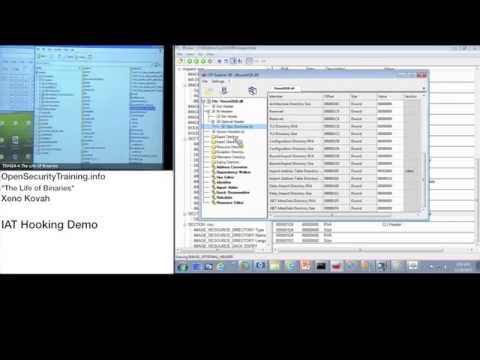